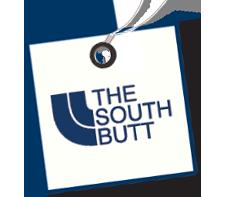 Winkelmann, started a company called The South Butt, producing a clothing line that was a parody of North Face. The product was wildly popular, but North Face was not amused. It sued for trademark infringement and soon thereafter The South Butt LLC closed its doors. End of story, right? Not! The Winkelmanns (the student and his father) settled with North Face and then opened a new company called Why Climb Mountains and started to produce and sell a new clothing line under the trade name The Butt Face.

I love this for two reasons – not only for the hoozpah of the Winkelmann’s, but also for testing the limits of trademark law. North Face took the new business to court, accusing Why Climb Mountains with bullying the famous designer and diluting the reputation of its mark in the public eye. In the end, the court found that Why Climb Mountains had violated its settlement agreement. Contractually, it had signed away its fair use rights (the First Amendment rights to parody the company). However, had it not entered that settlement agreement, it may very well have been able to continue sales of its parody clothing line.

In an article entitled ‘The Butt Face’ Lays Bare the Right Time to Protect a Trademark: In the Court of Public Opinion,’ James F. Haggerty expressed an opinion I agree with wholeheartedly: “There is a “delicate balance” (as one observer put it) between enforcing intellectual property rights and being so aggressive legally that you hurt your client and their broader business goals. In other words: sometimes it makes good business sense to be the butt of a joke.”

All puns aside, this story points out that trademarks are an important and valuable asset to clothing companies. After all, the parody is only effective if it evokes the image of the original in the mind of the consumer. The South Butt and The Butt Face were well-designed parody marks – enough likeliness to conjure up the image of the original (The North Face), but different enough that it was probably not infringing. Humor can sell. I hope other clothing companies will embrace the challenge and humor as with great parodies that make us smile. Good, clean fun.

What do you think?